What is a blockchain?

For Bitcoin, this database contains a ledger only. A ledger is basically records of how much “token” has been transferred between addresses. Everyone can create a “wallet”, and make a transaction on it. Those transactions will be visible by anyone in the world. Each time you want to “write” in the blockchain, it will cost a certain amount of “fees”.

“Dubious dev: So… why not create a huge Postgresql/MySQL/MongoDB database cluster, and make it open to everyone? 🤔”

At a really high level, a blockchain is made of blocks containing some data. They are linked with each other with a reference (a hash) of its previous block: 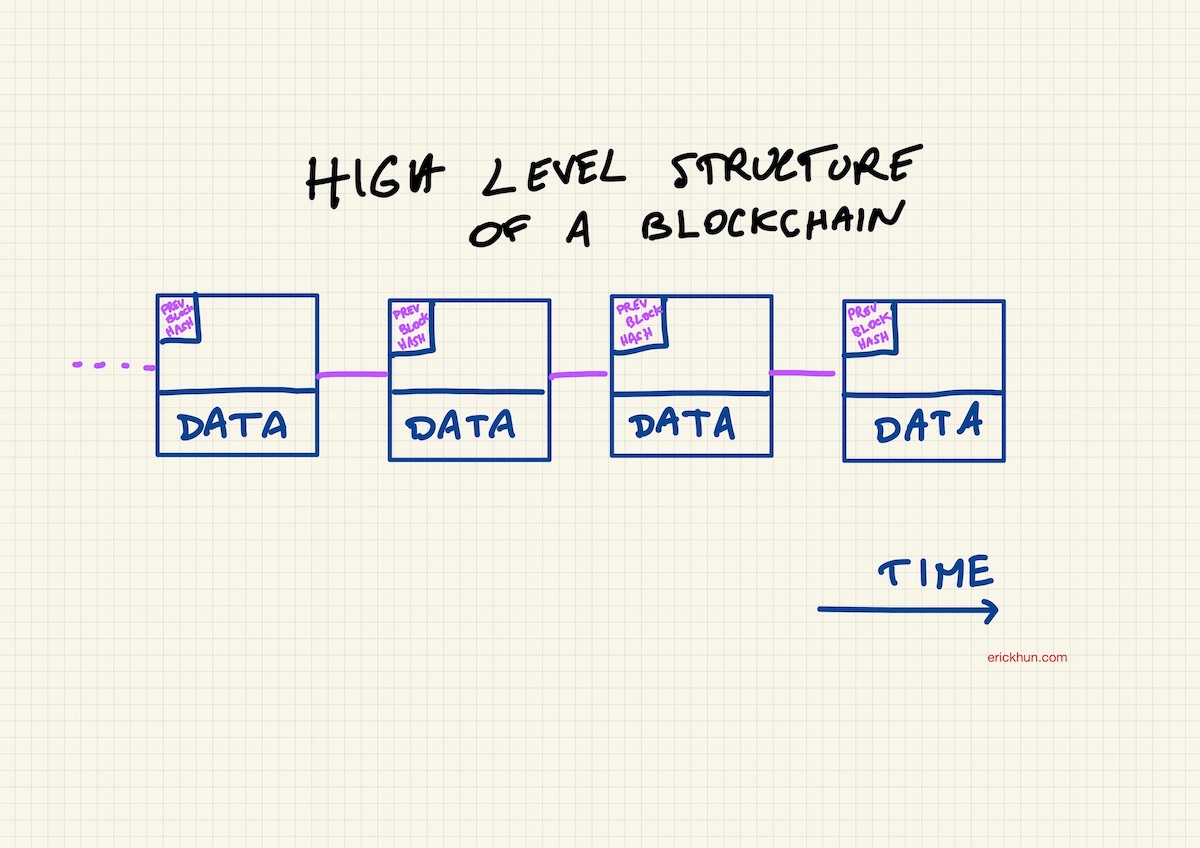 It’s really similar to a linked list, but there are some fundamental differences between the two, notably the mechanism of how blocks are added and the data it contains.

How are “blocks” built?

The way new blocks get added is quite sophisticated and isn’t quite instant.

When you want to make a new transaction on the blockchain - let’s say someone wants to transfer 5BTC to someone else - this will create a new “transaction” but is not immediately added to the blockchain:

The Mempool is a sort of waiting room with a priority ticket for transactions that are willing to pay more. The ship contains only a few seats (1MB), so it’s up to the miner to decide if he let you in or not. But you might end up in a ship going nowhere. 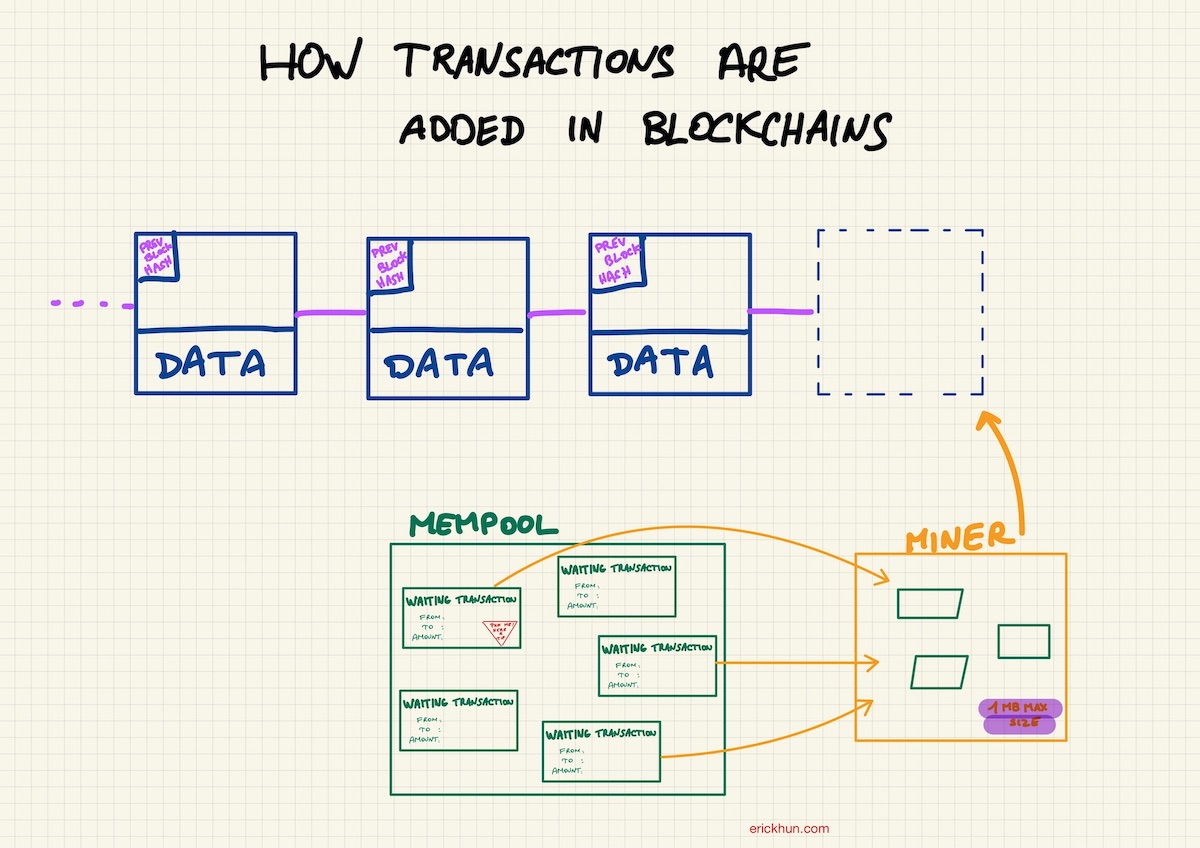 You can check all the unconfirmed transactions waiting to be validated in the Bitcoin blockchain here. You can also read here a bit about the controversy to have a bigger block size .

Well, this mempool/miner/puzzle architecture looks quite complicated for a database. Why is it needed?

Protecting the blockchain with Consensus and Decentralization

A “classic” database will allow anyone who has its credential to add/remove/edit records at their will. Want to delete a transaction you’ve made? Add a higher amount in your own wallet? How would you know this database will always be managed the way it said it will? How do you make sure the one managing the system will never attempt to change the transactions or the data in it? This is where decentralization, consensus, and immutability comes into play.

A blockchain “validates” and permanently stores the data after a consensus is reached. Consensus is an agreement about the state of the ledger. It agrees on things like account balances, the order of transactions, or even if transactions look legitimate. The most infamous consensus protocol is “Proof-of-Work” and used by Bitcoin and Ethereum.

Finding the “nonce”: Miners and Rewards

“Proof of Work” blockchains have an interesting concept where you have to solve a puzzle to be able to add a block to to chain. This puzzle is run by miners. It is a brute-force algorithm where the first miner who solved it gets a reward (and the privilege to add a block to the chain 😉). And this happens every time a new block needs to be added. Today, 1,000,000 miners are competing against each other in the hope to solve the puzzle. 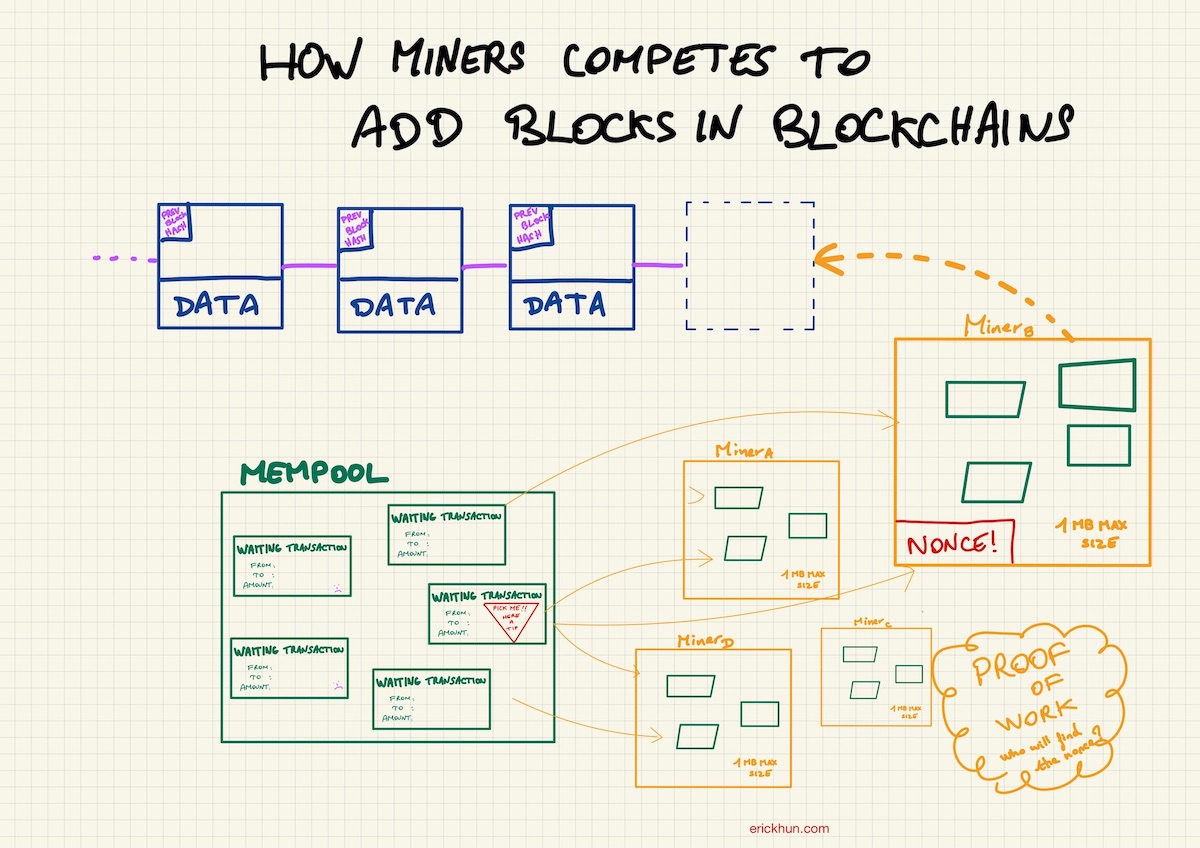 Bitcoin has a built-in algorithm to try to get a target of 10 minutes to mine a block. If it takes a lot shorter to mine, the difficulty increases, if it takes longer, difficulty decreases. It means the more “hashpower”, the more difficult is the hash function to find the nonce.

Since 2017, the difficulty has exponentially increased, requiring more powerful computation resource if you want to be lucky enough to mine a block. This is what lead to today’s heated discussion related to climate change and energy consumption: 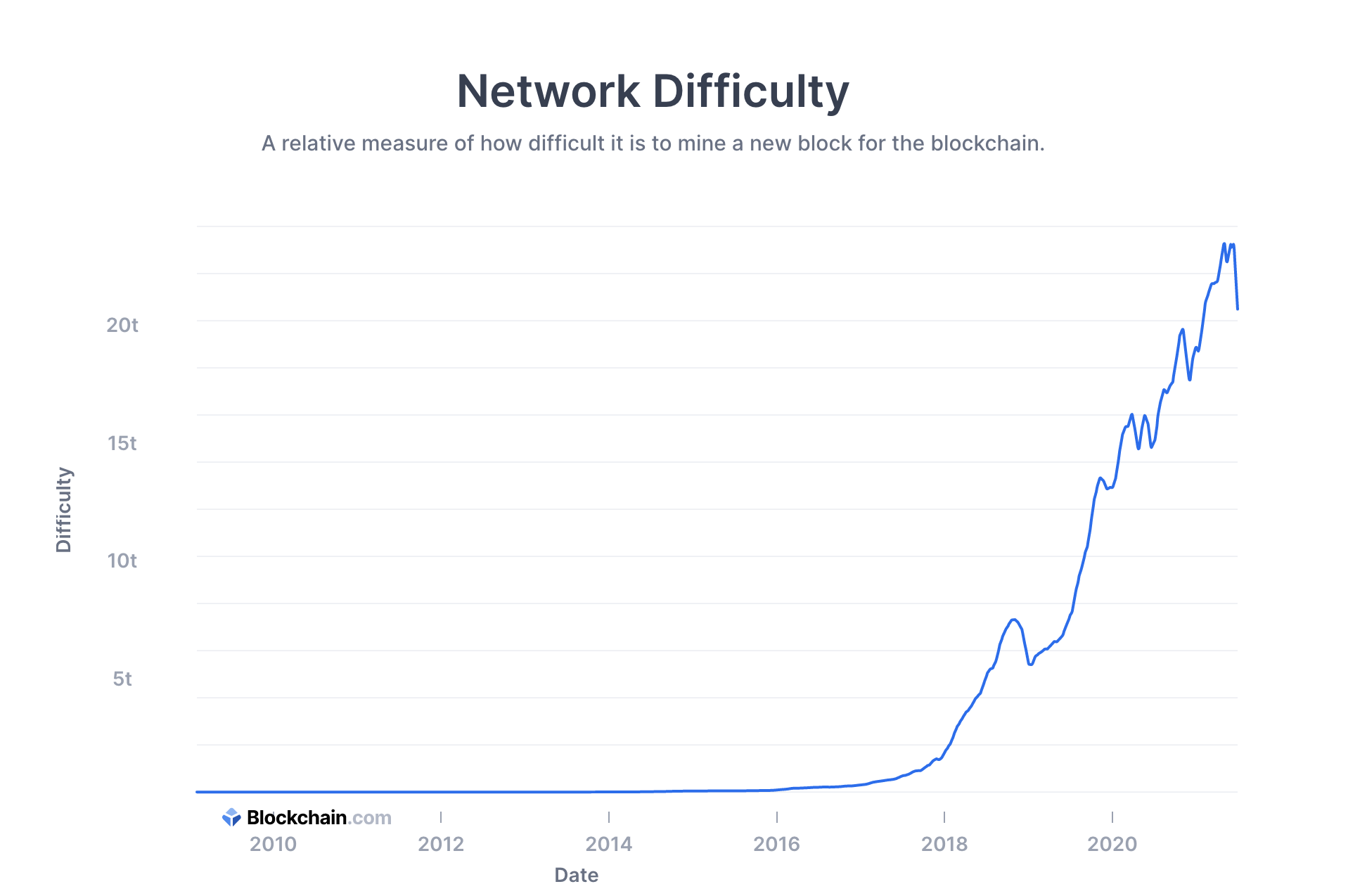 How long would that take to mine a block with my computer?

A difficulty of 1 corresponds to 2^32 = 4,3 trillion hashes. Your computer will have to hash a random number (via bruteforce) 4.3T times in the hope to find the nonce with the lowest difficulty possible.

This difficulty increase is why miners buy more and more GPUs (CPUs aren’t fast enough) to put in those gigantic “mining warehouses”, in the hope to find that lucky number.

Some new consensus starts to emerge to solve those issues. Ethereum is currently moving to a “Proof-of-Stake” consensus. The current Ethereum blockchain will “merge” (in 2022?) into the proof-of-stake system. Some (really) interesting variations of the Proof of Stake consensus are adopted in the blockchain space, particularly the Avalanche and Tendermint Byzantine Fault Tolerance consensus. Bitcoin however will keep the proof-of-work mechanism.

Securing the blockchain with decentralization and cryptography

“Dubious dev: What if I solve the puzzle and add a fake transaction 🤔?”

It’s almost impossible to create new blocks that erase transactions or create fake ones. If you were lucky enough to find the nonce, this doesn’t mean it will be added to the blockchain:

The 2nd step is where the “crypto” in “cryptocurrency: plays its main role. Blockchains use cryptography functions in many ways, but the first use case is to make sure one’s doing a transaction is actually the “owner” of the transaction. It is also called signing a transaction. You can do that with a “secret key” (or commonly called private key). You can “sign” transactions with that private key to finalize an action. It’s like a real-world signature. In the cryptographers world, it is called “asymmetric cryptography” or “public-key cryptography” in the developer’s world. With Bitcoin and Ethereum, miners will use the ECDSA (Elliptic Curve Digital Signature Algorithm) function to make that check. 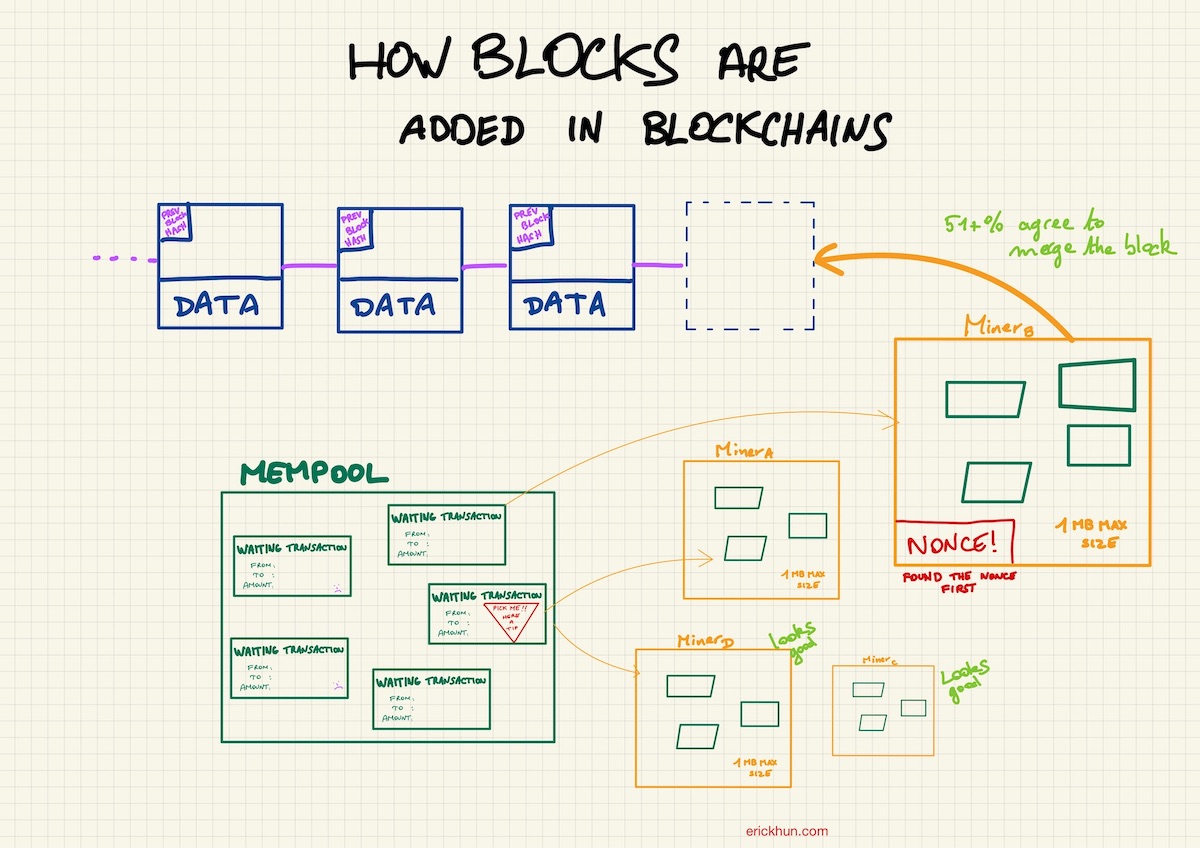 Some blockchains can store and execute some code, such as the Ethereum blockchain. The Ethereum “database” can store code and get the code executed. The code store is called a “smartcontract”. In Ethereum, the programming language is “Solidity”. For example:

In this example, each time the smart contract receives money, it will forward it to 2 charities. In between, the “facilitator” will take a 2% fee. Pretty simple isn’t it?

Once you publish this code to the blockchain ( you’ll have to pay each time you want to do that, it’s like an expensive git push command), anyone who wants to can call this contract. In this smartcontract, addresses that will send Ether (ETH) to this contract, those actions will be executed.

The logic in those contracts never changes and will be on-chain forever. The contract you agree to interact will always do what it said it will. No one will ever be able to change the logic. The ones creating this contract won’t be able to change it, even if they published it. So there is no risk of 1 party changing terms, because the contract can’t be changed. It will be on the chain as long as the network is alive.

As a developer, you might think it’s a bad thing. What if there is a bug? Well you better write perfect code 😉. There are many ways to “hack” smart contracts. Some (really expensive) services , often owned by famous security companies, exist to review your smart contracts before you publish them.

Privacy is one of the hottest topics in 2021. We don’t want to be tracked anymore, and try to hide from Internet giants like Facebook or Google. Bitcoin or Ethereum are however fully transparent. The ledger is public and anyone that has your wallet address can see the full history. It’s like a database with read privilege where you can query any balance or operations that happened for any wallet. For example see here how many Ethereum has Vitalik (Ethereum’s dad), or how he received $375 millions worth of “AKITA” token, and then forwarded that “unwanted money) to an India Covid relief fund: 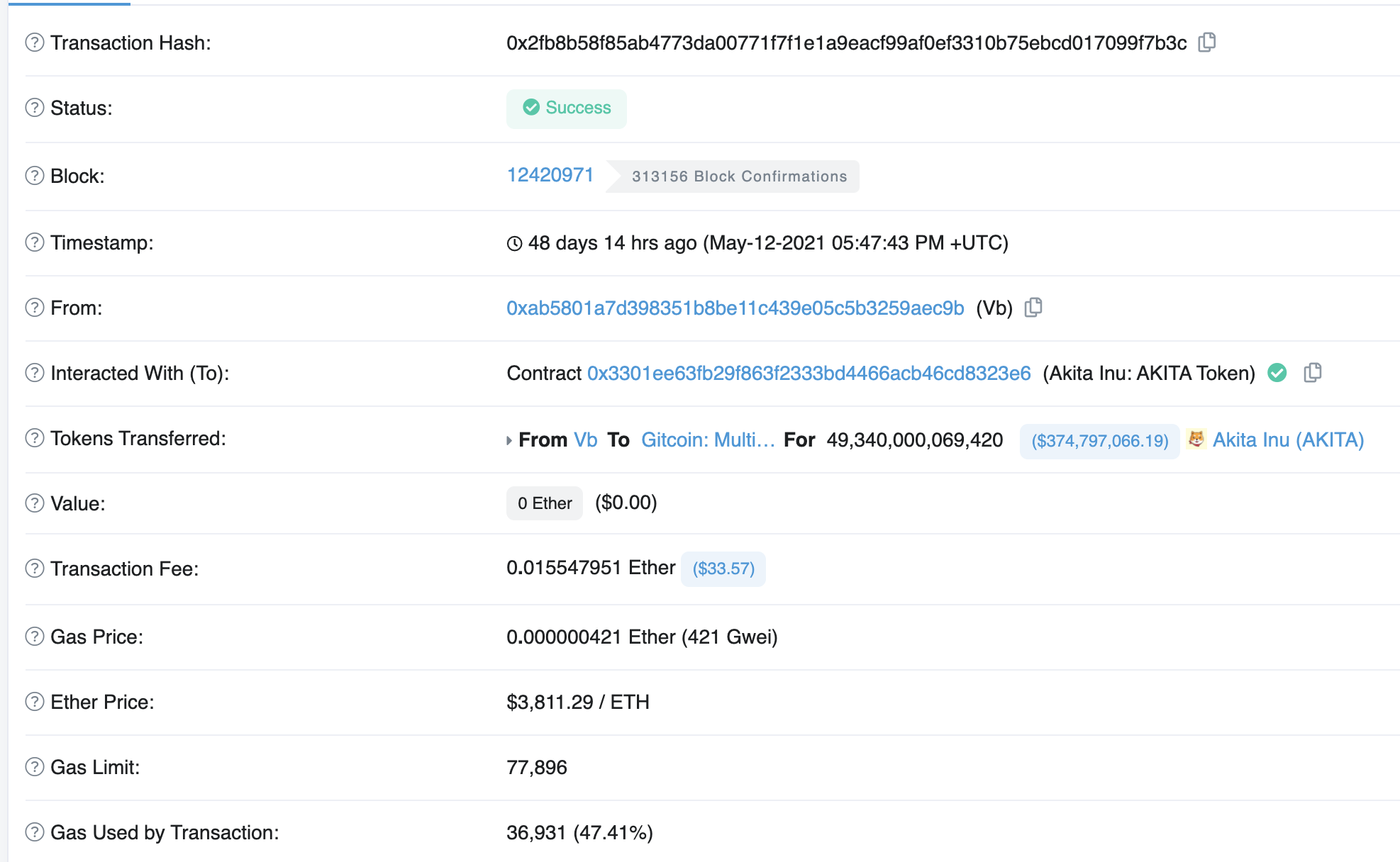 If you’re looking for privacy, some blockchains such as zCash or Monero make that information hidden. (Read on to understand how). But they’re still public since anyone can use them.

Some blockchains are private only. An interesting use case could be sharing some confidential data, between a group of specific persons. An idea could be applied for the CRS (Common Reporting Standard, for preventing tax avoidance). Governments could share information of bank accounts into that blockchain. With decentralization, no government will have the “privilege” to delete transactions in it. If a change needs to be made, the full history of changes will be written in the ledger.

A Blockchains is giant database that stores a ledger with all transactions of its users. It sometimes stores code that can be executed. The decentralization and consensus algorithm built into them make them almost impossible to be compromised by “bad actors”. With today’s blockchains aggregated valuation ($1.39Trillion!), it feels like the world is somehow betting that blockchains could be tomorrow’s new way to exchange money and share information. Or is that valuation only blowing smoke 🤔?

ps: I’m working on a NFT as Ads banner project: basically, an Adsense on the blockchain, where owner website has control of their ads. Reach me out if you’re interested to test it